This bas-relief discovered in December 1911 represents a pregnant woman, her left hand placed on her stomach and holding a horn in her right hand. Her hips are wide, the pubis and navel prominent, her breasts pendulous. The head, which has never been worked, is turned towards the horn, with the hair resting on the left shoulder. The feet are absent, the artist not having chosen to shape them. Traces of red ochre are still apparent on the breasts and in some hollows. The left arm has suffered from the excavation methods used in the early 20th century and bears the traces of two strokes of a pickaxe.

From a restricted surface area of 30 m2, the Great Shelter at Laussel has produced five bas-reliefs representing women, one adolescent and a representation of two opposed figures. Researchers have wondered about the meaning of this art to the prehistoric population. The work necessary for the production of these works is significant and the themes repetitive. These works were therefore essential to them and served to fix their thoughts in a durable material.

The Gravettian (between 29,000 and 20,000 years ago) has produced a wealth of these female representations, often in the form of small statuettes such as the "Lady with the Hood" from Brassempouy in Landes. The current interpretation is that these figures represent fertility, as they almost all depict pregnant women or women having had several children (very rarely male figures).

Unfortunately, the deeper significance of this art will probably remain unknown to us. 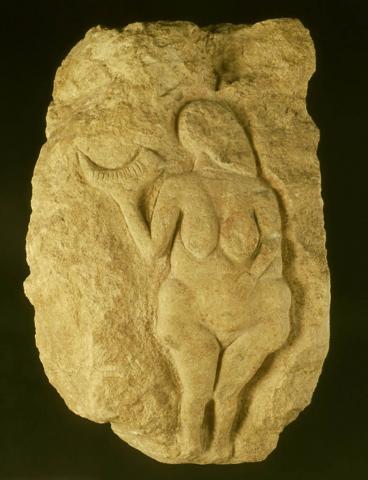